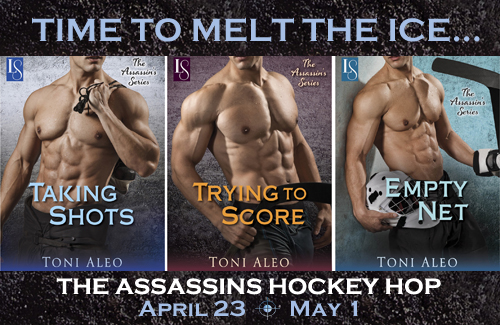 In Toni Aleo’s exhilarating debut, the first in a series featuring the hockey hunks of the Nashville Assassins, a reformed bad boy helps a charming, willful woman face off against the demons of her past.

In a captivating novel of second chances and healing hearts, the newest member of the Nashville Assassins pulls a power play to make things right with the one that got away.

In Toni Aleo’s third novel in her hot Assassins series, the chiseled men of this Nashville hockey team can make anything happen when they go all out for the women they want—even turn a one-night stand into a happily ever after.

a Rafflecopter giveaway <~~ Click for a chance at some fabulous prizes

1 thought on “The Assassins Hockey #Hop”