The Bank Job by Bonni Sansom

Please help me welcome, fellow flasher and teaser, Bonni Sansom. She has a new book coming out in just two days. We have all kinds of yummies for you. Below you’ll find a Q&A, the blurb and excerpt for The Bank Job and details on another of Bonni’s books with the giveaway information, so don’t forget to comment!! You have until the end of the day Saturday, July 21st to comment and then I’ll utilize random.org to find the WINNER!! First Bonni’s going to hook us on The Bank Job.

When stubborn Kat and Dom Jarrod meet during a bank robbery, things quickly get heated. She refuses to be a victim and he just wants everyone to get out alive. Can Jarrod tame her before they both get killed?

Now you know a little why I wanted Bonni here celebrating her book. Let’s learn more about Bonni…

Question #1. Picture your favorite place in the world. Now, can you tell us a little bit about the place you’ve pictured?

Bonni: There’s a beautiful fountain in Ashley Park that I love to sit by and write. The trickling water is peaceful, and I  can really focus on my writing there.

Question #2. What was the first book to make a lasting impression on you?

Bonni: I know this is going to sound silly, but the real book that got my creative juices flowing and making me believe “if she can do it, so can I” was none other than Twilight. Now don’t get me wrong, I love books and I’ve been interested in them for life, but that one was “the one” that got me started.

Question #3. What was the last book you read that made a lasting impression on you?

Bonni: There are too many to answer this question. I thought about it for a while, and could only manage to dwindle it down to a handful, but then again, don’t all books leave a lasting impression?

Question #4. Can you tell us about your challenges in getting your first book published?

Bonni: My first one wasn’t that hard to get published. I had a short story that a publisher was interested in, it was a short for a Christmas Anthology, but they turned it down and I submitted it to Renaissance eBooks Inc. and they said, “make it at least 30k” and I came back with 40k+ and they got Jack’s Christmas Wish out on Nov.11, 2011.

Question #5. Can you tell us about a criticism you’ve received that pushed you into a better writing place?

Bonni: Yes. Someone suggested my characters were a little bit bi-polar, so I have tried toning that down and putting the characters in the right frame of mind for the scene.

Question #6. Is anything in your book based on real life experiences or purely all imagination?

Bonni: In some of my books, for instance, Laine from Eternal Bliss is a lot like me. I would definitely be her BFF in real life. She enjoys a lot of the same things I do. And we both speak the same, so there ya go.

Question #7. Which one of your characters would you NOT like to meet in real life?

Bonni: Ha! To tell the truth it would have to be Kat from The Bank Job. She scares the shit out of me. I could never be as brazen or as bold as she is.

Question #8. Which one of your characters would you most like to meet in real life?

Bonni:  All of the men. Ha, ha! I definitely wouldn’t mind meeting the hero’s of my stories. They’re so sexy it hurts. And come on, they look, so freaking good to the mind’s eye.

Question #9. How did you come up with your title?

Bonni: In most cases I have a title before I have a book. The stories seem to come to me. I never have to spend time chasing an idea because it came to me in a dream or hit me in the shower. That is the truth so help me. I can be in the midst of a shower, rinsing out my hair and all the sudden I have characters (with names already) telling me their story. This happens so often that I bought kiddie crayons to write on the shower wall before I forgot it. My husband says there’s nothing like reading a sex scene when he gets in the shower.

Question #10. Tell us a bit about the projects you are working on now?

Bonni: Right now I have just finished my very first paranormal story. “Hunter’s Bounty” Hopefully this one will be in an anthology with three other very talented writers. I’m also working on the sequel to Eternal Bliss and I just turned in the second Redemption story and I’m just waiting to hear back from them. I have another 6 stories in the fire. All at different stages, so I have a lot on my plate at the moment.

Thanks, Bonni!! That was fun, but I want to read more about The Bank Job.

Katherine ‘Kat’ Anderson goes to deposit her check and ends up in the middle of a bank robbery. She refuses to cower and will fight them to the bitter end—to the robbers she’s a pain in the ass, but to the manager she’s sexy as hell.

Jarrod Miller’s day started off bad and only gets worse when three armed men burst into the bank he manages. He does everything he can to ensure his customers get out alive, but pink-haired Kat seems determined to get them killed.

When they are locked in an office together, things start to heat up. Between Kat’s stubborn defiance and Jarrod’s Dom attitude, will they rip each other apart or just their clothes off?

Kat had sold her weight in dildos and other toys, but every time a butt plug landed on the counter in front of her, she blushed. She was definitely not used to blushing, but that night had changed something inside of her. Something she would deny until her dying breath—she really cared for Jarrod. They’d been talking on the phone as much as they could, having phone sex whenever possible. He was really good at getting her off with his words, which was weird because she hardly ever got off without a lot of stimulation. But when it came to Jarrod, the words from his mouth could get her off in just a few minutes. She was happy she had the same effect on him as he did her. They were evenly matched.

“Kat. Earth to Kat.” Marcus waved his hand in front of her face, trying to get her attention. “There’s a customer that needs help in the leather department.”

“Alright, sorry, I was just lost in thought.” Kat quickly rounded the counter to go help the guy that had his head stuck in a leather face mask. It was a common problem. They zip them up but can’t zip them back down. She sighed and approached the man cautiously. This mask didn’t have eye holes. “Sir, please just stand still and I’ll help you get the mask off.”

He stood still and held his arms out to her. He mumbled something she couldn’t understand, but she grabbed the zipper and slid it down. “Is that better?”

“Yes ma’am, I appreciate it.” His face was as red as a beet, but she didn’t dare laugh at him.

“Did you want to purchase the mask?” She knew the answer, but had to ask anyway.

“No, I don’t think so.” He blushed even further.

Marcus came over to her and whispered in her ear. “Loverboy is on the phone for you. I’ll take over here if you want me to.” She nodded and headed for the phone.

“You know what’s up. My cock is up and it wants to play with you.” He made a growling noise she loved.

“Alright, but this is the last time. I can’t keep doing this at work. I do have a serious job, you know.” She scoffed, knowing damn well he wouldn’t go for that line.

“You sell sex on a daily basis. You love making me come and you know it. Don’t bullshit me, Kat.”

“Okay, fine, I’m bullshitting you, but I really need to stop doing this at work. You can surely wait until I get off.”

“I’d love to wait till you get off. That way I don’t come first.” He chuckled.

“You know what I meant.”

“I mean it. I can’t keep doing this here.” She huffed out a breath as she played with a clit stimulator that was purchased and brought back for a refund.

“Okay, I hear you. I won’t call you at work anymore, but since you’re off tomorrow, you could come here after I get off work and spend the night having sex. Sound good?”

“Where would I go, sweetheart?”

“Don’t call me that. It sounds so stupid. I’m no sweetheart.” She let the vibe buzz in her hand.

“Are you coming over or not?”

He had that commanding voice he used in the bedroom. “Yes, Sir. I’ll come over after work.” She felt like she should snap to attention, but then laughed it off.

“I’m pretty sure I can figure it out.” She turned it off and laid it down on the counter.

“I’m sure you could, but I bet I can show you ways you never would have thought of. Just bring it.”

“Alright, I’ll bring it. Geez, you sure are bossy.” She started to call him an asshole, but refrained.

“You bet your sweet ass you will. Remember where the key is?”

“Yes, I remember. Gotta go.” She hung up on him and headed for the customer.

I know, I know, you’ve got to wait two more days before you can read any more. Remember I know Bonni from flashing and teasing, ha, ha. But, wait, Bonni has something to giveaway. Take it away Bonni. 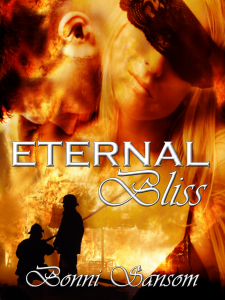 I just want to thank you SJ for allowing me the opportunity to get to know your fan base and I hope some of them try and enjoy my books. One lucky winner here will win a copy of Eternal Bliss if they leave a comment. Have fun and good luck.

I hope you enjoy the blurb and excerpt of The Bank Job, which will be out Saturday, July 21. On this link.

11 thoughts on “Spotlight: The Bank Job by Bonni Sansom Q&A and Giveaway”