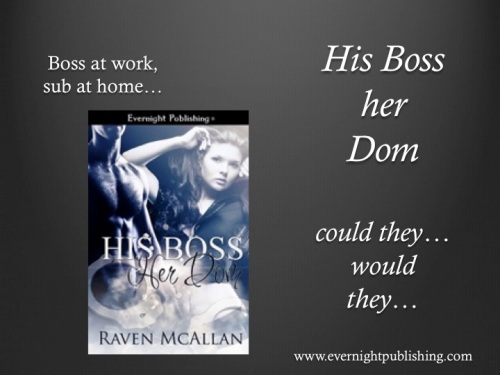 His Boss Her Dom

Having a relationship with your boss is never easy, especially when it involves kink. Jamie might need to salute Eva and call her Ma’am at work, but when it’s just the two of them, he is Master to his puss.

They are determined to make their unusual situation work, but, first they have to solve the case of the shady next door neighbors.

Every fiber of her subbie being wanted to kneel and ask to submit to him. But as the letter told her she was to take another week’s leave, and have a ‘dalliance’ with the new postie, she’d need to be careful. A dalliance in the name of work was one thing. A dalliance because she wanted to submit to him was another. She was still his superior officer, and in charge of this case, or whatever they chose to call it. Case was a bit of a misnomer. All she’d mentioned was a lot of very expensive top of the range cars were driving up the lane, and the same cars weren’t coming back. It seemed that had interested some people in the force, hence Jamie the new postie, who filled his uniform rather nicely.

Mind you if I remember rightly, he fills his police one to perfection as well. Shit he’s young though. Cougar is okay, right? Well it doesn’t matter in the lifestyle so sod it. But this isn’t the lifestyle or Dommissimma. She put the dog down and watched abstractedly, as he turned around in circles and settled in his basket. Then she went on with her internal argument.

Damn it, does dalliance cover a bit of subbing? Probably not, more’s the pity. And he doesn’t recognize me anyway. It was probably just as well. To be the superior to the guy who had you almost bare ass naked strapped over a spanking bench and flogging you until you flew, could cause a few problems. Best not to bring it up unless he did. Not until after. If, she thought despondently, there was any chance of an after. He might throw a wobbly because she hadn’t been open and honest with him. After all, he was a Dom, and even in the short time she’d played with him in Dommissimma, the BDSM club she went to in Glasgow whenever she got the chance—which wasn’t often—she knew damn well he was a good one.

Why is life so bloody complicated? Oh fuck it. Eva decided it was time to pull up her big girl panties and get over her mump. She’d always been a sub, never wanted to be a Domme, and was happy and comfortable with that. However that part of her was separate from her work persona where she was in charge. There she was his superior officer—even if only for the time being—and she couldn’t forget it.

Later, was later, as her cliché-ridden boss had a penchant for saying, along with, ‘now was now’, and ‘no time like the present’. As well as ‘priorities take precedent’. Which was so bloody obvious that Eva always wanted to snigger when she heard him utter it.

She rummaged in the fridge and found the ingredients to make paella. If Jamie didn’t like seafood he could have a quiche. The garlic made her pause for a second, but not to put it in, on the off chance of getting close up and personal, was stupid. It was work, not play of any kind. However, just thinking about playing with Jamie, Master Jamie, made her knickers wet. Eva gave into temptation, put the paella in the bottom, simmering oven of the Aga and took herself upstairs for a short and fast session with her bullet. It took three climaxes before she was sobbing and spent and slumped limply on the bed. The memories of his crop on her ass, and the tight nipple clamps he attached to her nubs, and linked them with a chain he attached to her clit and pulled on to apply pain, featured in most of her wet dreams and climax inducing fantasies. This had been no exception. Her pussy was soaked and her juices coated her thighs and the fingers she’d used to help her bullet, and increase stimulation. The pulse between her cunt and ass throbbed hard and with each beat, more of her juices spurted out. She hadn’t come so hard, or needed to, for many a long month. Work had been so demanding the nearest she’d had to a wet dream had been falling asleep in the bath.

Now, with the reappearance of Jamie, it seemed that her libido roared back with a vengeance. She could only hope it stayed that way, and every climax wasn’t a solo one.

Well what can I say?

Dh and I live on the edge of a Scottish forest, and rattle 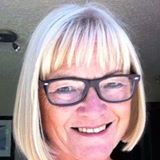 around in a house much too big for us.

Our kids have grown up and flown the nest, but roll back up when they want to take a deep breath and smell the daisies so to speak.

I write in my study, which overlooks the garden and the lane. I’m often seen procrastinating, by checking out the wild life, looking—only looking—at the ironing basket and assuring tourists that indeed, I’m not the bed and breakfast. That would mean cooking fried eggs without breaking the yolks, and disturbing the dust bunnies as they procreate under the beds. Not to be thought of.

Being able to do what I love, and knowing people get pleasure from my writing is fantastic. Long may it last. 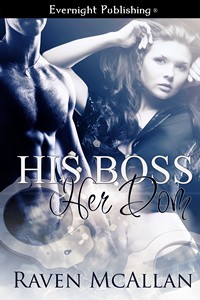 2 thoughts on “Spotlight: His Boss Her Dom by Raven McAllan”