I’m super excited today to have Doris O’Conner in my ehouse. Woot! I’m a huge fan of this talented author and I always enjoy her flash fiction talents. I just finished reading two of her Romance on the Go titles from Evernight Publishing, yum, and she’s brought one of them with her today. Enjoy. 🙂

What’s in a title?

Hello everyone, and a huge thanks to S.J. for hosting me today. I thought I would ponder about the importance of titles today. One of my funny quirks is that I need a title before I even start writing. More often than not that original title stays, but sometimes the story takes an unexpected twist. Heck what am I saying? My stories always take an unexpected twist. Even when I have a vague idea where a story might be going, my characters do something that I didn’t see coming and somehow by the end of it all it just works—somehow. Don’t ask me how, though, I have no clue.

I’ve learnt to simply trust in the process.

Now, The Orgasm Project started as a Flash and it didn’t have a name to start with. Jake and Carter, however, niggled at me, until I sat down and wrote their story, and there was only one title I could give this.

I had such fun writing this story and I hope readers will love it as much as I loved writing this. 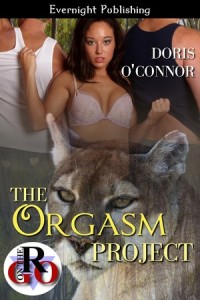 What’s a girl to do when her best friend confides her inability to orgasm? Set up the Orgasm Project of course, and Maria knows just the guys to do it. Full of themselves her hot as Hades brothers might be, but at least they are safe. What can possibly go wrong?

Anastasia wants the ground to swallow her whole, when she meets the twins. How embarrassing can this be, even if the gorgeous hunks set her knickers aflame with just one look?

Jake and Carter know their mate when they see her, and nothing is going to stop these cougar shifters from claiming her. Their night of passion leads to discoveries neither one of them is prepared for.

Has their bite awakened a monster or their destiny?

She opened her eyes to find Jake smiling down at her. Carter’s gaze, too, sought hers through the rear view mirror, and a shiver of unease went down her spine at the disapproval she read in his eyes—eyes that bled from blue to golden and back again as she watched in stunned fascination.

“What are you?” The question left her lips before she could stop herself, and she inwardly groaned at her stupidity.

“You know what we are.” Jake said, his hot breath a whisper’s breadth away from her neck as he sniffed her again. “Look into yourself and tell me that you don’t feel this connection. I know you do. Your body gives you away as surely as your sweet scent. You’re wet for us just thinking about what we might do to you, and that’s not fear I can smell, but arousal. You want us as much as we want you, have wanted you from the first moment we caught your scent all those months ago.”

Anastasia shook her head and pushed against his chest. His heartbeat thundered under her fingertips in tune with her own galloping rhythm. The fact that he seemed as affected as her by whatever was happening between them gave her a heady rush of feminine power. Liquid arousal pooled between her thighs and slicked the top of her legs. She put up no resistance to Jake’s questing digits trailing up her inner thigh. Underneath the skimpy dress she had worn at Maria’s insistence, his hand inched ever upwards until his knuckles brushed against the damp fabric covering her slit, and she bit back a moan when his thumb found her clit. That normally shy little bundle of nerves contracted under that slight touch and seemed to swell in need. Jake caught her groan in his mouth, and Anastasia forgot any objections she might have had at the first swipe of his tongue inside her mouth.

If she thought he smelled good, then he tasted even better. His musk exploded on her tongue, and she opened to his gentle insistence. He swooped in and took possession of the kiss. One hand fisted in her hair while the other still showed homage to her little nubbin, and she gasped into the ever more passionate kiss, when one of his incredibly long fingers slid under the elastic of her thong. She was so wet that he slipped right into the tight clasp of her body, and her internal muscles contracted around that digit. He growled low in his throat, and she ground herself against his hand as his thumb settled on her clit.

He added another finger and then a third, thrusting in and out of her needy pussy in tune with his tongue’s thrusts inside her mouth, and Anastasia gave herself up to the ever more urgent demands of her body.  Her hands fisted in his shirt, as the tingles started deep inside her core. Like a tidal wave of sensation they grew and tumbled forth, retreating a bit with every thrust, only to double in force with every faster pump of his fingers inside her channel.

The car lurched round a corner and then came to an abrupt stop. Cool air rushed into the heated interior, and Anastasia moaned her denial when Jake withdrew his fingers. In the blink of an eye she was freed out of her seat belt, and Jake broke the kiss to shift her body backwards. Carter’s strong hands gripped her thighs, and she caught a glimpse of his glowing eyes, before he buried his head between her thighs. Her underwear gave way with an audible rip, and then his hot breath on her swollen folds robbed her of any coherent thoughts.

“My turn to taste her, brother.” The growled words vibrated against her slit, seconds before his tongue delved into her quivering channel. Anastasia arched her back in desperate need to get closer to the hot mouth he used to such devastating effect on her clit. Jake chuckled in her ear, and she saw him lick his fingers, slick with her arousal. The sight was incredibly erotic, and she could taste herself in the kiss he gave her. Carter chose that moment to bite down on her clit, and she screamed. The barely functioning side of her brain marveled at that need-filled scream, muffled as it was by Jake’s kiss, and she clamped her thighs around Carter’s head, as she started to tumble over that elusive edge no man had ever managed to help her over.

Unlike the weak orgasms she had managed by her own hand, this one took her breath away. All sense of time and reason disappeared as her body convulsed under the hands of her lovers. Carter pushed her over that edge again, and again, and again, whilst Jake’s hands played with her breasts and nipples. He rolled each hard nub between his thumb and forefinger, pinching hard, and the sharp pain zinged straight to her clit.

Jake finally broke the kiss and nibbled his way down her neck as her body shook in delicious aftershocks.

“All ours,” the men grumbled in unison.

Glutton for punishment would be a good description for Doris… at least that’s what she hears on an almost daily basis when people find out that she has a brood of nine children,

ranging from adult to toddler and lives happily in a far too small house, cluttered with children, pets, dust bunnies, and one very understanding and supportive husband. Domestic goddess she is not.

There is always something better to do after all, like working on the latest manuscript and trying not to scare the locals even

more than usual by talking out loud to the voices in her head. Her characters tend to be pretty insistent to get their stories told, and you will find Doris burning the midnight oil on a regular basis. Only time to get any peace and quiet and besides, sleep is for wimps.

9 thoughts on “What’s in a title? With Doris O’Conner”