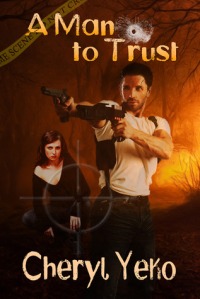 A Man to Trust

The battered survivor of an abusive marriage, Angela doesn’t mourn her husband’s death in a drug deal gone bad. But she’s not sure she can survive losing her heart to the handsome detective who believes she’s a criminal, too.

Tasked with Angela’s safety after she’s targeted by an unknown enemy, Jake discovers the beautiful widow is not what she seems. He soon realizes that trusting her goes hand-in-hand with desiring her, and passion and duty collide.

Now it’s up to Jake to keep Angela—and their chance at happiness—alive.

This story took hold of me on page one. I instantly liked Angela (heroine) and began cheering for her, but Jake (hero) didn’t buy her story, and boy oh boy, it made for some page turning fun. As the story begins to develop, Jake is forced to take another look at this sexy female and protect her from men trying to kill her. This book lives up to the name romantic suspense, you have them both, live and in heart pounding action.

There are several hot scenes in here as well. Cheryl does a great job of pushing her characters to face their realities and makes them deal. It’s not always pretty, and you better believe Jake stumbles over his tongue a time or two, but they keep trying and we’re rewarded with scorching pages.

Nothing really comes easy for these two though. At one point Angela says: “When he looks at me, he sees a drug dealers wife. He’ll always be suspicious that I was a part of it.” Nope, nothing comes easy, they have to fight for it all. The ending pages are very satisfying, there are some fabulous tense moments, everything gets wrapped up in a way you’ll enjoy. I really liked this book and easily give it Five-Stars.

Click on the cover above to see A Man To Trust on Goodreads.

note from S. J. : A Man to Trust was provided to me for an honest and fair review

1 thought on “Review: A Man to Trust by Cheryl Yeko”