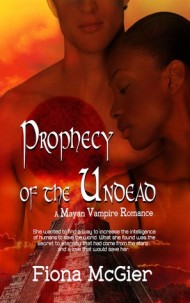 Prophecy of the Undead

Keisha is a neurobiology researcher determined to discover the secret to intelligence to save humanity from itself. What she learns leads her to realize a bigger threat comes from beyond the stars. Yuri is a Russian vampire whose long-dead feelings respond to the scientist whose brain he admires but whose curves he can’t resist. Will his love reach the places in her heart that she has ignored for so long? And can they defeat the prophecy of the undead to find happiness sharing eternity?

Prophecy of the Undead starts like a freight train. The heroine trusted the wrong person and now her life is in jeopardy. Thank goodness she has a secret admirer who just happens to be a vampire. The start is fast past, exciting and romantic, although the romance does continue, it’s nothing like in these first pages when they’re first falling for each other. The next section is full of mystery and once again the heroine’s life is threatened, but by her own hand. She’s not crazy, there is some scary evil behind it, you’ll have to read the story to figure that part out. It’s chilling. There is also a climatic end and setup for more to come.

There are a handful of sex scenes and they’re all very well written. The conflict is heavy and well placed, nothing feels forced. the story reads faster in some places than others, but the whole is a very intriguing read. The genre is a bit of a mix, the syfy is there, but definitely not a huge part of the book which leans more towards the paranormal and the vampire skills in Fiona’s world. Her spin is fun. I liked it, it’s a solid 4.0. You should think about reading it too.

Click on the cover above to see Prophecy of the Undead on Goodreads.

note from S. J. : Prophecy of the Undead was provided to me for an honest and fair review

1 thought on “Review Prophecy of the Undead by Fiona McGier”