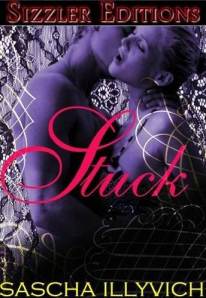 I have a special treat for you today, Sascha Illyvich is in the ehome. He’s sharing a bit from one of his many releases AND he’s giving Query advice. He breaks it down and gives us something to focus on. Thank you, Sascha. I have a bunch of his links above and you can click the pretty cover to see Stuck on Amazon. After you get hooked by the blurb, you’ll find Sascha’s Query tips, then the Excerpt from Stuck, and at the bottom you’ll find a bit more information about Sascha.

Kandy is a young, free spirit. Not afraid to live life, she pushes her body and soul to the limit, hitting all the loud metal concerts, knocking back drinks with the best of them, and coming home hung over to Ian Richards, the man who has taken her under his wing since she came to live with him after her parents died years ago.

Of course, Ian has a past too. He and his ex-wife parted on friendly enough terms, but he still feels guilty for their breakup. It seems to him that his sexy little roommate, who happens to be nine years younger than him, was a part of their problem. Only, his concern for her seemed fatherly until she comes home one night after a Slipknot concert and decides to seduce him. After all, she’s old enough.

For someone her age, she’s wise beyond her years, which even Ian can give her, but still. Can Kandy show Ian that in order to grow, he has to get his priorities straight? Can he get out of his head and let go of the past long enough to see just what he has under his nose? Or will he cling to memories of the past failures and remain stuck?

As an editor the easiest thing I can get to weed out crappy books from good ones is that query letter.  All authors should know how to query and for whom.  The process may differ between editors, agents etc.

Now, a little full disclosure here.  I’ve had a few glasses of bourbon because this topic, while is something I’m good at, is still something that makes THIS industry deity shiver.  I think it’s just the nature of the beast.  That being said, you want that query to do two things:

Let’s start with how to capture my attention (and consequently, that of an agent.)  Opening hooks are the greatest tool an author has.  A great opening hook automatically makes me perk up and wish to keep reading to further discover what treat you have in store for me.  It’s like the opening line of your book, only “businessified.”  Yeah, I just made that word up.

The businessification of your opening line comes from the segue.  For example, with my query for Covenant of Wolves 1: Stalker(Dub Mix) which is represented by the Corvisiero Literary Agency, the opening line was  Can open honesty lead to trust?  Covenant of Wolves 1: Stalker (Dub Mix) explores this idea with Prince Faolan and Millie the Fae in modern day America and Faery.

The first question piqued her interest, the second said what.  Then I brought out the big guns and in a pithy, yet descriptive manner, gave the rundown of the plot.  By the way, plotting meticulously makes this job MUCH easier as you’ll know the ins and outs of your book.  Relating your characters struggle into one sentence, with an extra clarifying statement that continues to draw me the editor (Or Marisa, the agent) in and keep us wondering makes for a solid query.

Now let’s talk about my second point.  Justification that me acquiring this book as an editor, or an agent seeking to make money off your story is not really as hard as it seems.  You simply need to understand your market in its total capacity.

You’ll want to wrap that query up and leave us hanging.  I as an editor want to know what’s next.  My agents, both of them, want to know what’s next so you must build our excitement.  You’ll also want to have a unique angle.  With “Stalker” the uniqueness is the cyberpunk aspect of a universe that traditionally eschews tech because it’s bad for the Fae.  Then I came in and said “let’s make the dark kingdom cyberpunk and see what happens.”  Marisa liked it enough to rep the book.  That works.  What’s your unique hook on the story told?

If you’ve done that and we’re requesting the story, you are free to rely on your superior talent to carry you through to the next stage.

Speeding down I-45 towards Dallas, he didn’t know what he was thinking when he let her drive.  It was one thing to say “here, let’s take my car,” and another to say “Kandy, you drive.”

He should have known better.

Taking his car was a better choice, it was brand new.  He took very good care of his new Jaguar, but Kandy just had to test the new fuel injection system on the highway this time of year.  She just had to test the sound system complete with the latest and cleanest speakers on the market.

It wouldn’t be so bad if she listened to something calmer than the vocalist from Mudvayne scream.

Of course, maybe she identified.  The vocalist was quite pissed off, but he had to be in his early twenties, right?

Stopping at a truck stop in Centerville, they both got out, stretching their legs.  Kandy was dressed in blue jeans that hugged her well rounded ass and emphasized just how tiny she was, a red velvet jacket that hid her frame.  She wore a tight black top, showing Ian plenty of cleavage.  Her bright red ponytail swung over the curve of her ass.  Complete with two inch boots, she was a knockout!

Finishing up, Ian met Kandy outside the store and walked with her, arm in arm towards the car.

“Coward.” Sticking her tongue out at him made Ian think of things he shouldn’t.  This was just a little vacation, right?

“Fine,” she retorted to his silence.  But I get to crank up the music still.”

They got in the car and immediately, Kandy turned up the stereo.  More Mudvayne.

“Oh come on, there’s passion behind this band. You know what that is, don’t you?”

Ian groaned loudly.  “Yes, I know what passion is.”

“Was.  Until,” she stopped herself.

Ian was quick to catch her mistake.  “How old are these guys?”

It was too late.  Kandy had drifted into the heavy rhythms of the bass players’ slap technique.

They were just outside Dallas when Kandy reached over and put her hand on Ian’s thigh.  Twitching, he ignored her, feeling deaf.  She’d switched out Mudvayne for a louder band with a vocalist who vacillated between sounding like an angel, or like he’d swallowed pins for breakfast.

Jerking when her hand inched up his thigh, Ian looked at Kandy, thrashing to the music.  Well, that was a term for it anyway.

Before Ian became fully cognizant, Kandy’s hand had managed to find its’ way to his crotch.  The warmth of her hand was welcome, but dangerous.

“What are you doing?” he asked when his zipper slid down.

Kandy reached a hand into his pants, threading her fingers through his boxers.

Choking back a groan, Ian managed to keep his eyes on the road.  It had grown considerably darker now.

“What the hell are you doing, Candace?”

“Mmm, don’t call me Candace,” she purred before freeing his cock.  She began stroking it, her fingers warming and massaging his rigid cock.

“I can’t pull over for this nonse–” he couldn’t finish the sentence.  Keeping his eyes focused on the road, he realized her warm breath had kissed his cock.

Then her lips fell over him.

Her lips brushed the head of his swollen member, Ian’s knees jerked against the gas pedal, sending them within inches of the car in front of them.

The car in front of them honked, flipped Ian off and changed lanes.

Ian peered down, then at the driver who gave him a thumbs up once he glanced over to see Kandy’s mouth working him over.

Ian groaned pleasurably.  His body was on fire, his nerves ready to explode in Kandy’s mouth, but he maintained control.  If she wasn’t careful, they’d wreck.

It started to snow.

“Fucking great!”  Ian choked the words out when she sank his cock completely inside her mouth.

“I know,” Kandy replied.  “You taste so damn good,” she licked the head of his cock like a lollipop.  Ian grunted, trying to concentrate on the road, but Kandy’s tongue snaked around his shaft, sliding up one side and down another.

Clutching the steering wheel, his knuckles had turned white by now, and his thighs ached from his trying to remain in control of his car.

It purred, or at least he thought it did until he slowed the car and saw Kandy, purring against his cock.  The sensation sent shivers racing through him.  Her hot mouth covered him, sliding his cock out of her mouth with a popping sound.

“Kandy,” he gritted his teeth together.  Slowing the car, he heard her giggle.

“This is so fun though,” she lowered her mouth over his cock, brushing the sensitive skin with her teeth.

The friction of her wet lips against his swollen sex was enough to drive him wild.  “You should stop,” he reiterated, “or I’ll come in your mouth.”

“That’s the idea,” she licked him again.

Thrusting his hips upwards in an attempt to buck her, he quickly realized that he only added to their pleasure.

She wasn’t going to stop.

Ian didn’t care right now.  The speed sign passed by too quickly for him to see what the legal limit was, but it didn’t matter.  His gray jaguar could outrun any patrol car, but he really didn’t want to have matters come to that.

“Kandy,” he lowered a hand to her hair, stroking her curls, playing, tangling his fingers in her silky hair.

“Silly pet,” she uttered and moved up and down his cock faster and faster, excitement building in him.  His throbbing cock jerked in her mouth once, his control over his body gone. 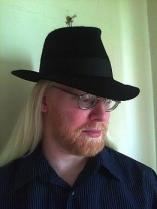 I host the Unnamed Romance Show on Radio Dentata and continue to write for Sizzler Editions and Total E-bound. Readers can find my work, plus free reads at http://saschaillyvichauthor.com

3 thoughts on “Spotlight: Stuck by Sascha Illyvich and Query Secrets”