Cover by (the amazing!) Jay Aheer

Gregorio Bosco worked his way up the ranks of The Family. He never had trouble killing, selling, or anything he was tasked to do. He’d been trained to take over for Giovanni when he stepped down, but that all changed when Alessandra was taken. She was the only good in his life, and he’d do anything in order to protect her—no matter the cost to anyone around him.

Alessandra Morello was born into a life that she didn’t understand. She thought she was the daughter of a wealthy industrialist, however she learned it was far from the truth. She’s pulled into the center of a war with Gregorio as her only constant. Her attraction for the older man has only grown over the years, but can there be a future for them in their twisted world? 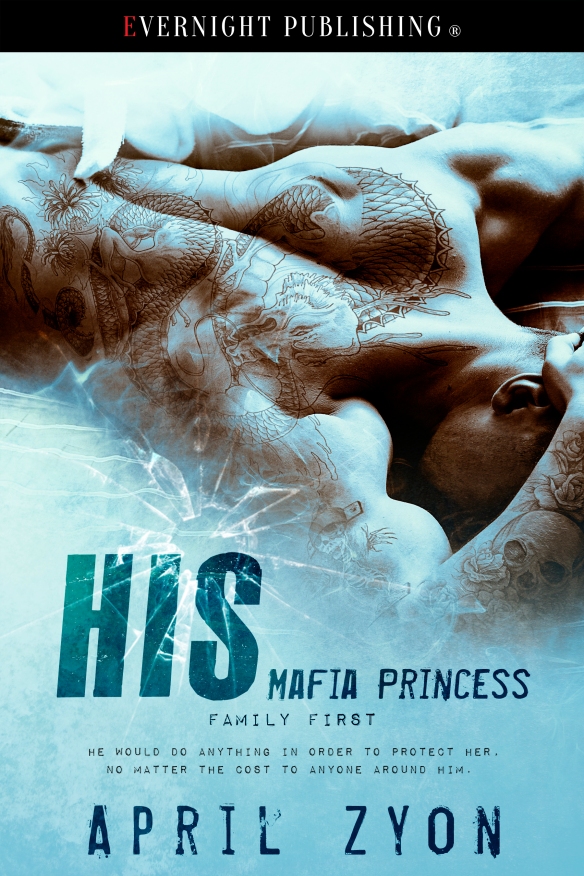 Gregorio was pissed off that he had been called to the mansion, again. He had to get a hold of his men, or the Boss wouldn’t let him take over in the timeframe given to them. It wasn’t because of his fuck up, but one of his underlings. The little bastard was dead now. Greg had personally seen to it. No one got away with stealing from the family, not under his watch. Period. Now if only he could get the Boss to agree that times needed to change and the stakes had to be higher so that their family ran even tighter, because the Russians were trying to move in on their turf and usurp their power. It was up to Gregorio as the Boss’s right hand—and eventual heir—to ensure that they died trying instead of taking over the area that they had carved out for themselves.

When he was let into the Boss’s study, he stood loose in front of the man. Gregorio was armed and ready for anything. “You called?”

“Gregorio, take a seat.” The man didn’t pose it as a question, and Gregorio knew it. It was an order. Once he was sitting, the Boss nodded. “I hear you took care of the mistake.” The Boss sneered as he said the last word, as if it were dirty. “And you made an example?”

“Yes, sir. I did. He’s currently hanging with his hands cut off and his gullet filled with molten silver. His silver-filled body was left on the lawn of the Russian Boss’s home, as per your request. We will need to be more careful with our recruits. How this one passed as Italian, I will never know. It was the theft from the small general store that got him. The girl recalled him speaking Russian as he stole from her. She was injured and in the robbery, she remembered our underling because he had come to collect the protection fee two days earlier.”

Gregorio smiled. It was a smile of pure darkness as he thought of the pain the man suffered. He then tilted his head slightly as he asked the next question. “You let your daughter leave without a guard?” Gregorio changed the subject to one he really wanted to know. That woman had gotten under his skin and had been there since she was sixteen when he saw her naked in the pool house. That was when he was third in the organization. Gregorio killed the second because he was jacking off to Alessandra. Only he was allowed to even think of her in that capacity, and he ensured that every-fucking-one knew it. Even the Boss knew now that Gregorio had declared himself to the man.

“She plays golf with her friends every Thursday. Her guards are with her. Have you learned more of her mugging?”

“I have.” Another reason Gregorio was angry; he was here when he should be tracking the bastards that hurt her. No one hurt her and lived.

“And?” the Boss asked impatiently.

“One of them is sitting in my basement tied to a chair. I was in the middle of discussing respect with the man when you called.”

“It’s more than respect,” the Boss said angrily. “You would do well to remember respect yourself.”

Gregorio had to bite the inside of his cheek. “Yes, Boss. I’m sorry.” He hated those words because it was a reminder of just how much more Gregorio had to learn. Just saying them had him wanting to kill someone.

“That’s better. You have to remember who you are speaking with at all times. Yes, I have been grooming you to take over, but that’s in the near future. In the meantime, you’ve much to learn, things I had to learn the hard way through trial and error and a lot of blood lost.”

“Thank you, sir.” Those words came from his mouth in a near growl. It wasn’t that Gregorio didn’t appreciate what the Boss was doing for him, but the simple fact was that he was impossibly impatient at times.

“Now, what was offered to Tomas to make him turn from his Family?”

“Half million and the promise of a new life. Beyond that, it was the tie to his long lost relative who was a Russian that we didn’t know about.” He shook his head decisively at that statement.

“The Russians are growing bolder. They are searching out long lost Russians in our family’s men and enforcers. Seems as if we need to work on our own genealogy so we can head these off at the pass when possible.”

Greg knew the truth though. The old man had twin sons that were older than Alessandra, but they were born from his whore so they would never hold any sort of position of power inside of the organization.

“I agree. She’ll never know the truth of this life. Not as long as I live. That’s my blood vow to you, Boss.” He would give it too, his blood to keep Alessandra safe, to keep her pure and to keep her out of this life.

He was going to say something else when the doors opened. Gregorio was on his feet with his weapon drawn on reflex.

The man who stood in the doors literally pissed his pants. “I’m sorry, Boss, but we got a note you have to read.”

Gregorio holstered his weapon and watched. He was curious about what would have anyone daring to open the door when he and the Boss were in a conference. No one but Alessandra dared do such a thing. She would breeze in when they were planning war and not realize what she walked in on.

When the Boss stood fast enough to send his chair flying behind him, Gregorio knew it had to involve Alessandra. She was the only one that would garner that sort of reaction in the man. “Those fucking bastards!” The Boss yelled out his frustration. “Get everyone here.” He looked at Gregorio. “Someone took Alessandra. Took her in the middle of a crowded lunch at the Country Club.”

Gregorio saw red. He shook in his fury. “Who?” He spoke to the man that brought the note. “Where are her guards?”

“They were found in their cars, both with holes in their foreheads. Whoever did this made it personal. They wanted these men to see who killed them.”

“Boss?” Gregorio waited for his orders to find the woman that held both of their hearts.

“Go. Find her. Take her to safety. I’m done with these Russian bastards on our turf.”

“You calling a war?”

“They did when they took her,” the Boss said as he pulled his weapons from his desk.

Video for His Mafia Princess