Thanks so much for having me on your blog today with my new release His to Punish, book two of my dark romance series The Cleaners. This is the story of Ren’s second in command Ty Mason. Ever since I wrote Book one in the series, His Prize, I’ve been itching to tell Ty’s story.

Ty seemed much softer than Ren, when we first get to know him, and to an extent that is certainly true. Ty though, like all of the cleaners to be fair, has many layers. He’s just as deadly as Ren; ruthlessly protective of those he cares about and deeply loyal.

I had great fun unravelling the truth behind who is Ty Mason, and there were a few surprises in store, I tell you. Subsequently this story is much longer than the first book in this series. It has many twists and turns as my too-feisty-for-her-own-good heroine goes looking for revenge… Which places Ty in somewhat of a dilemma.

Ren is like a brother to him, and he will do anything to protect his family, but what is he to do when the one woman who gets under his skin seems determined to threaten that family.

Well, you’ll have to read the book to find out what happens, I’m afraid. 🙂 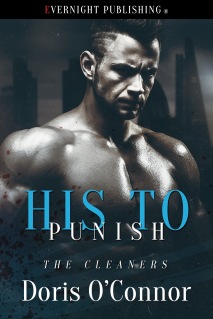 Revenge or love…either choice will sacrifice her freedom.

Dance teacher Jeanette MacArthur has one thing on her mind when she auditions for a job at La Masquerade—revenge. She couldn’t protect her sister from the criminals she now seeks employment with, but she can ensure that justice prevails.

If only her body wouldn’t melt at the touch of one of them. Ty Mason, second-hand man of the Cleaners, oozes dominance, aggression, and danger. He stands for everything she ought to despise, yet this unwanted attraction threatens to ruin her.

Ty can’t take his eyes off the new dancer, not least because he senses the threat she represents. Only one thing for it—claim her for his own, and torture the secrets out of her—if need be.

Her unwilling submission, however, means he discovers more than her secrets. His heart and their future are on the line.

Ty’s hands went to his belt, and she jumped when he spoke again.

Jeanette complied with shaking hands, and another one of these deep, dark growls rumbled from Ty’s chest, when she stood before him naked. Try as she might she couldn’t bring herself to look at him, had to fight the insane urge to sink to her knees, in fact. Lord only knew what was happening to her. She was losing the plot, because she could swear she could feel Ty’s intense gaze like a physical touch, as he ran it over her naked body.

She jumped again when he cracked the belt through the air like a whip, the resulting snap far too loud in the quiet room. He stepped around her, running one finger along her skin. From the tip of her nose, around her mouth, down her neck, and along her collarbone into the valley between her breasts, he continued the silent exploration, the contrast of his much paler flesh next to hers a heady aphrodisiac indeed. When he cupped one of her breasts in his hand and lifting it, bent his head to suck her hard nipple into his mouth, Jeanette couldn’t stop her whimper of need. Unbidden her hands tangled in his hair, to keep him there, as every hard suck made her pussy quiver in need. She could smell her own arousal in the air, as her juices slowly trickled down the inside of her thighs.

Ty bit down hard on the breast in his mouth, and the sharp pain of his bite made Jeanette cry out. Not in pain exactly, because she was far too turned on and already teetering on the edge of an orgasm.

Ty soothed the leftover ache from his bite by licking it, before he abruptly withdrew.

“I haven’t given you permission to touch me, girl.” He reached up to grasp her wrist, and Jeanette immediately let go of his hair. She caught a glimpse of his stern expression before he swung her around.

“Face the wall, and spread your legs, girl.”

It didn’t even occur to her to disobey, and when he joined her moments later his clean male musk enveloped her.  He crowded her against that wall, the coolness of it against her skin a direct contrast against the heated male body pressing against her from behind. The feel of his chest hair against her back made her hyperaware of his harsh breathing. She closed her eyes against her shame, when he reached around and between her legs. There was nowhere to hide now, as confirmed by his next words.

“So fucking wet for me. You’re mine now, girl.”

A bite to her shoulder followed that possessive claim, and Jeanette cried out in surprise when he shoved two fingers into her pussy at the same time. Wet as she was they slid right in, and her internal muscles clamped down on the invaders. Ty thrust those digits in and out of her channel and adding another one, finger-fucked her with merciless precision. His cock was a hard, solid ridge against her hip, and he groaned into her neck again, when she spread her legs wider for him.

“Yeah, that’s it, baby, your body knows who you belong to, doesn’t it?”

Jeanette tried to respond, but nothing but a keening sound came out, because Ty curled his fingers to massage her G-spot. Pleasure surged through her hard and fast, and her hips took on a life of their own as she rocked herself against his hand, desperate to gain the friction she needed to her clit to get over.

Before she could get there, however, Ty withdrew his fingers, and slapped her ass hard. Jeanette moaned her denial and shoved her ass back into him in a silent bid for him to continue, but she should have known that was a useless exercise.

“No, your orgasms belong to me now, and you will not come without my permission.

One hand fisted in her hair, he pulled her away from the wall and marched her across to the cross. Jeanette’s heart missed a few beats, and then turned into a jackhammer when she caught side of their reflection in the mirror on the wall.

She looked like she felt, a woman on the edge. Her eyes were too wide, her mouth, still swollen from his earlier kisses slightly open, her breasts swaying from side to side, and shaking with every harsh breath she managed to draw into her lungs, as he half dragged her along. Her skin already showed the marks of his possession, his bite marks clearly visible, and she groaned when his arm came round her waist, and he kicked her legs apart. It meant her swollen most intimate parts were clearly visible. Jeanette ought to be ashamed at how wet she was, at the needy sounds that immediately spilled from her lips, when Ty yanked her head back further, and rubbed his jaw along her neck. His breath singed her skin, and their gazes locked. His dark eyes flashed with dangerous intent, and Jeanette’s internal muscles clenched in response, sending more moisture to her swollen lips.  Ty smiled when he noticed, and his voice dropped even further, sending yet more shivers of dread, or was it anticipation, down her spine. Her clit quivered, the usually tiny bud clearly visible at the top of her hood.

“Take a good look, titch. Your body doesn’t lie. You want this, need it, even, and I’m just the man to give you what you need. All you have to do is ask.”

2 thoughts on “New Release! His to Punish, The Cleaners by Doris O’Connor @mamaD8”