Skip to primary content
I’m excited to share my newest release with you. My beta readers have said that this is my hottest book to date! One-click for $0.99 to see if you agree!
Relentless Pursuit available now for a special release price! 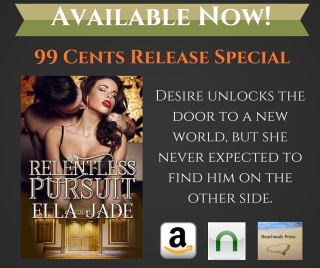 Desire unlocks the door to a new world, but she never expected to find him on the other side.
Julian Anders has a way of making women drop to their knees. He’s fierce, domineering, and knows what he wants in the bedroom. He craves total submission. His busy life doesn’t allow him the luxury of traditional dating. He doesn’t want it and doesn’t need it. He makes no apologies until Kayla Quinn, his best friend’s younger sister, shows up at the exclusive club where he finds his companions.

Kayla has been unsuccessful in love and is tired of waiting for the one. When a friend introduces her to an upscale club that caters in matchmaking without the commitment, she decides to try it. She requests a mature, dominant man, but she never bargained for what happens next.

Julian is enraged to find Kayla interested in men like him. Men who have no desire to commit. She’s not the club’s typical client. He’s known her for years but stayed away despite his strong attraction to her. He decides the only way to save her from a potential disaster is to pursue her himself. Can she handle his darker side? The one she never knew existed? Perhaps he’s finally met his match…both in and out of the bedroom.

“You feel something between us. I can’t believe that of all the clubs I could have gone to, I found the one you own. That has to mean something,” Kayla said.
“Coincidence.” Julian’s dismissive tone discouraged her, but she wasn’t going to give up.
“Romantic.”
“Definitely not that.” He shook his head as he pressed his lips in a hard line. “Not from me.”
He was too much of a guy to admit he could do romance. Connie had told her women didn’t seek him out for a nice time. No, they wanted a wickedness they could remember for a lifetime. Kayla craved to know the things Julian desired. She wanted to be the woman he took them from with no apologies and no exceptions.
“It’s getting late,” he said. “I should get you home.”
“I can be her,” she blurted out, because she wasn’t going to let this opportunity slip through her fingers. She didn’t believe in coincidence. She had to seize the moment.
“Who?”
“Whoever you seek out on your application. Let me try to be her for you.”
“If I hadn’t overindulged you in champagne, would you be this courageous with me?” He tilted her chin, holding her still as she pondered his question. “Be truthful, and not just for me. You owe it to yourself to be honest.”
“I drank too much, but what I’m saying is true.”
“You don’t know what you’re saying.” He kissed the tip of her fingers before releasing her from his hold. “Even if you believe it to be true. That’s a big problem for me.”
“Why won’t you give me a chance?”
“Because you’re not the woman for me.”
Ouch! Not even the alcohol could numb that sting.
“How do you know?” According to Connie, he gave complete strangers his undivided attention when he was matched in the past. What was wrong with her?
“I’ve been doing this for a long time.” He sighed. “It’s not you, it’s me.”
“Seriously? You’re going to go with that line?”
“I’m sorry if I misled you. I shouldn’t have allowed you to think I was going to take this any further.”
“I don’t understand.”
“You’re young, vibrant, witty, charming, and funny.” He took her hands in his. “You don’t need to be here. You don’t need men like me. Whatever happened in college with those guys, it’s in the past. You’ll find what you’re looking for. Give it some time.”
“That’s not for you to decide.”
“It is tonight.” He released her and took his cell from his pocket. “I’ll have Francis, my driver, bring the car around. He’ll take you home.”
“You can’t dismiss me. I won’t let you.”
“I just did.” He placed a soft kiss on her forehead, and damn her, she still wanted more from him. “I want you to go home now. I’ll see to it you get there safely.”
“Save your call, Mr. Anders. I can grab a cab.”
“I’d rather you not.”
“I don’t care what you’d rather.” She grabbed her shoes from the floor and her clutch before heading for the door. She didn’t have to stand there and be humiliated by him. “I’m perfectly capable of seeing myself home.”
“You drank too much. I’d feel better if you didn’t leave here alone.”
“Maybe you should have thought about what you wanted to do with me before you kept filling my glass.” Take that, Mr. Insensitive!
“Kayla.” He raised his voice. “Don’t push me.”
“Actually, your firm tone isn’t going to work on me.” She opened the door. “Considering I’m not that woman.”
Amazon 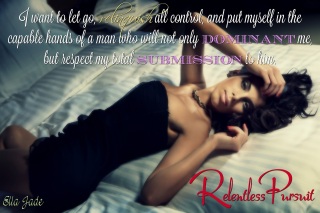