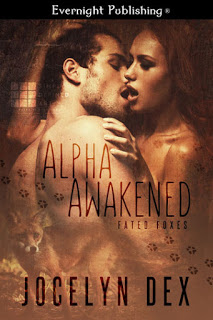 Fated Foxes, Book 1
Jocelyn Dex
Release Date: February 18, 2016
Erotic Romance, Shifter Romance
Amazon Universal Link * ARE * Evernight
*Note: Alpha Awakened is the sequel to Alpha’s Vixen in the Bad Alpha Anthology, but it can be read as a standalone. Amazon Universal Link for Bad Alpha
Blurb
Hale, a fox shifter, hates everyone and everything, especially himself. He’s an angry, bitter, mentally unstable drunk who blames himself for his mate’s death. Not being able to tolerate being in the presence of female fox shifters, uncontrollable rage erupts when he meets Hope, and he’s torn between killing her and kissing her.
Hope knows she has to have Hale the second he steps inside her shop. The fox inside her comes to life and demands to be claimed. Even though Hale is vulgar, volatile, and threatens her at every turn, she wants to ease his pain, bring joy back into his life, and make him hers.
Can Hope break through Hale’s walls and awaken the alpha within, or will Hale finally scare her away for good?
Excerpt
Hope’s skin itched. She’d been so busy with the shop, she hadn’t shifted in days. She peeled off her clothes and laid them neatly on the couch, then stepped outside and let her fox free.
She dashed across the property, the fresh night air and the feel of grass beneath her paws invigorating her. She sniffed out a frog and nosed it with her snout. Even though they made a tasty snack, she’d already eaten dinner and watched it bounce away.
After making a few laps, she raised her nose, sniffed, and froze dead still. Hale’s scent and the stink of liquor hit her. Excitement warred with anxiety as she spotted his beautiful Fire and Ice fox form standing at the bottom of the steps to the porch. Correction. Not standing. More like swaying and stumbling. Falling down and staggering to all fours, and repeating the action. She wondered how much he’d drunk to be in that bad of shape and how he even made it this far. And why was he there?
Even in his incapacitated state, she marveled at his beauty. Fluffy, cream-colored fur covered his legs and chest then morphed with the red and light brown that peppered the rest of his body.
When he fell again, she wanted to run to him, to help him, but in his debilitated state, she wasn’t sure if it was a good idea or not. When he suddenly shifted to human, she gasped. Even though every one of his ribs was clearly defined, he was still beautiful.
He sat there swaying and staring at the cabin for several minutes. Then he buried his face in his hands, his shoulders shaking. She didn’t think he’d appreciate her seeing him so broken, in addition to being there at all, but she had to comfort him. Or die trying.
She padded up to him and nosed his arm. He jerked and fell over before pushing himself back up and staring at her with wet, vacant eyes. The anger she’d expected didn’t come. Instead, he reached out and clumsily stroked her fur. A pained expression crossed his face and tears streamed down his cheeks as he laid back on the ground and curled his malnourished body into a ball.
Hope shifted to human, squatted beside him, and took his hand. The vacant expression disappeared as his gaze raked over her nakedness.
“Come inside,” she urged softly, trying to ignore the arousal spiking her veins. It wasn’t time for that. When he sat up with her help and she saw the erection jutting from between his legs, she instantly went wet.
He inhaled long and deep and she knew he could smell her arousal. His erection twitched and before she knew what was happening, he shoved her backward and pounced on top of her. “Inside,” he slurred.

Amazon Universal Link * ARE * Evernight
*Note: This is the sequel to Alpha’s Vixen in the Bad Alpha Anthology. Amazon Universal Link
Bio
Jocelyn was born in Iowa and currently resides in hot-as-hell Texas. She shares her home with her very own 6’4″ alpha male and varying numbers of spoiled cats and dogs. Jocelyn writes paranormal and contemporary romances that include humor, lust, love, and four-letter words on the way to a Happily-Ever-After.
Sign up for Jocelyn’s newsletter for exclusive content and giveaways. Newsletter
Visit Jocelyn Dex on the Web: Website * Facebook * Twitter * Blog  * Goodreads