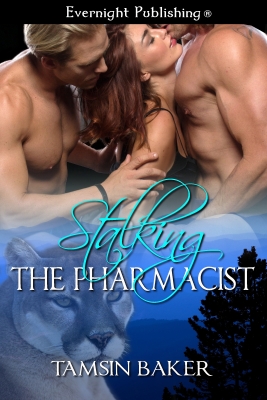 On the surface, Ashleigh had it all—money, a great career, and a successful husband. But behind closed doors, life wasn’t so pretty. Now she’s free, and determined to never let herself be vulnerable again. So when she gets an invite to her cousin’s wedding, she jumps at the chance to get away. The small town nestled at the base of the Rocky Mountains seems like the perfect place to unwind and start forgetting about her abusive ex-husband. The last thing she expects to see is her beloved cousin Laura marrying two men, and to find herself irrationally attracted to a pair of twins.

Scientist Scott and football coach Jack are a perfect pair of mountain lion shifters who made the horrible decision when they were young to break from tradition. Each married a woman who made his life miserable, rather than search for their destined mate. Now in their forties, they’ve all but given up on finding their mate—until they see her. All the signs show that Ash is their true mate. Jack is eager and ready to chase, but Scott’s scars run deep. Will they be able to overcome the past and create a new future?

“Hey, Aunt Rosalie. Congratulations on finally marrying those two off.”

Jack kissed the woman, and Ash gulped air into her lungs. What on earth had happened outside when Jack and his twin, Scott, had touched her? It had been like they’d reached inside her and attached electrodes to her soul, shooting pleasure into her belly and destroying her ability to hold her own body weight. If Jack hadn’t stepped forward when he had, she would have ended up on the ground, a pulsing mess of sensations.

“Yeah, well they had to wait for the right woman to come along, didn’t they, Jack?”

Something almost stern in Rosalie’s tone snapped Ash’s attention back to their conversation and she watched a slash of red color Jack’s handsome face.

“Yes, they were much smarter than I.”

Oh, so he was married? He wasn’t wearing a ring, although that wasn’t a given for all men. Divorced, then? Or had he let someone go?

Rosalie turned back to her, blue eyes glowing with warmth.

“Jack have you met Laura’s cousin Ash? She’s a pharmacist from Toronto.”

“I did, outside for a moment, though I didn’t realize she was a pharmacist.”

Ash swallowed the lump that had risen in her throat and straightened her shoulders. She could do this. Conduct a conversation with a man she couldn’t keep her eyes off.

He grinned at her, that smile lighting its way down into the pit of her belly, pulling on an area between her thighs that Ash had believed had died a long time ago. After her ex-husband had done such a good job of destroying her self-esteem, she hadn’t thought a man would ever truly appeal to her again.

She squeezed her thighs together and almost gasped at the jolt of longing that just being so close to this man brought her. She’d never believed in lust at first sight, but this had to be it!

“I’m a football coach for the local high school. I played pro ball for a few years after college.”

Ash’s blood cooled like the heat had never been. He said that with such arrogance, as though it was actually impressive! She frowned and looked away. What was the easiest way of escaping? Maybe say she needed to go to the toilet?

“Oh, that’s nice. Would you excuse me? Rosalie, could you tell me where the bathroom is, please?”

Yeah, I’m not impressed by the fact that you can kick a bloody ball around, buddy.

She smiled at Rosalie and tried to ignore the odd pain in her gut. Why would she want to stay and talk to a footballer, for God’s sake? Thick as a brick and more focused on his body than anything of importance.

Rosalie’s eyes widened as though she were shocked by Ash’s reaction, but Ash wasn’t budging. How stupid did they think she was to fall for the charm of a philanderer? Ash waited for the information she’d requested, smiling as sweetly as possible at her hostess.

“Head down the hallway there, and it’s the third door on the left.”

Ash gave Jack a half smile and bobbed her head. “Nice to meet you.”

She turned on her heel for the second time in ten minutes and headed off in the direction Rosalie had sent her.

The house was incredible. The ceilings were high and the rooms were spacious, yet had that cozy home feel that only special people managed. She stopped outside the bathroom and stared at the framed picture on the wall. It was of Tyler and Brandon, about fifteen years earlier. They were lanky and their noses were too big, yet their smiles were exactly the same. Cheeky and oh-so-charming. Her cousin was a lucky woman, indeed. Assuming of course they didn’t turn into the arrogant pigs most men could be. Though judging by their mother, they’d be skinned alive if they did.

“I love that photo.”

Rosalie had snuck up behind her and poked her nose over Ash’s shoulder.

Ash turned and smiled at the proud mother. “My cousin seems very happy, Rosalie. I’m so glad she’s found someone…ah…” Laura was sorta married to both of them, right? Ash had read the invitation wrong and turned up two hours early. She’d been shocked at first to see two grooms surrounding her cousin, but Laura’s happiness had been so evident, it was impossible to judge her harshly.   “I mean, men who will look after her, love her.”

Rosalie swiveled so she was blocking Ash’s escape into the bathroom, her abundant figure beautiful in its feminine shapes.

Ash nodded. “I don’t know your sons at all, but I do know Laura. That woman is a gem.”

Rosalie crossed her arms over her impressive bust and looked at her with intense eyes. Ash cocked her head at the older woman.

“Is there something you want to tell me, Rosalie?”

Rosalie’s beautiful eyes were troubled as she worried her lower lip with her teeth.

“My sons are a perfect pair. Which means that they are perfect compliments to each other, in both looks and personality. Pretty much think of it as your perfect man, divided into two.”

Ashleigh laughed, the bubbles spreading through her belly and out. She had to cover her mouth with her hand, she was so loud.

“Well, in my experience that would be the only way to get a halfway decent man.”

Rosalie frowned at her, and Ash stopped laughing. That was probably too much information for a woman she barely knew.

“Jack and Scott are a perfect pair also, so please don’t dismiss Jack because you think he isn’t educated enough. He has a college degree, but chooses to spend his life educating young men about the strength of their bodies. Scott is a scientist with the government, he chose a different path.”

Heat seared a path up Ash’s neck and blossomed across her face. The tone Rosalie had just taken with her could only be called chastising, and she was feeling it right down to her sickened belly.

“I don’t like football, or footballers, Rosalie. I have just endured a very nasty divorce, so please excuse my rude behavior. I’m not interested in anyone, especially two men who…”

She trailed off, her cross-referencing brain pulling together fibers she wasn’t sure she should.

She took a breath and stared directly into Rosalie’s blue eyes, seeing the truth there before she even asked the dreaded question.

“Rosalie, do all perfect pairs marry one woman?”

She placed her hands on her hips and barely stopped herself from tapping her foot when Rosalie looked down for a moment.

Then the woman looked back up, her mouth tight as she nodded. “Yes. They are designed to find one perfect woman for them.”