Okay, Erin, get comfortable. Picture your favorite place in the world. Now, can you tell us a little bit about the place you’ve pictured?

My favorite place, hmm… When my two boys were little, it used to be an imaginary place called Alone and Quiet. Now it’s a gorgeous lookout on a hiking trail I’ve been going to lately. It’s got great views and, incidentally, happens to be both solitary and silent. Coincidence? I think not…

How lovely. There’s a trail here that I adore. It’s not far from the city, but whenever I’m there I feel at peace. I’m glad you have a spot too. We’ll have to share pictures some time. When you are not writing what are your favorite hobbies?

I love to hike. The more isolated the area the better, though I have to admit, the last hike included a bit more rock scrambling than I expected. I was super sore for a week. My other favorite hobby is ballroom dancing. My husband and I have been doing it for years. It kind of feels like flying with your eyes closed: scary and thrilling at the same time.

I’m impressed, Erin. Those are hobbies to be proud of for sure. My husband and I took waltz lessons before we got married. Our first dance was pretty sweet. Of course, we’ve forgotten all we’ve learned, lol. What turns you on creatively?

Music. A really good movie or a really good book. I’m rather fond of superhero stories and apocalyptic tales, don’t know why. I think it might have been all those years as a girl wishing for the ability to light things on fire with my brain. 😉

What is your greatest fear?

That someone I love will be injured or pass away.

What is your greatest extravagance?

Most people will probably say: “Oh, my car, or that sauna I had installed last year.” When I think about our family budget, though, by far most of the money goes to food. I’m a bit of a foodie. I don’t eat fake anything. I adore a perfect meal and I tend to cook a lot.

I want to come eat at your house. 😀 What is the one thing you do after finishing a story?

Start the next story! Sometimes I drag my husband out for dinner, too.

Tell us a bit about the projects you are working on now?

My latest release is a really fun book about a shy woman who needs a hero to come rescue her from the horror of attending a wedding all by herself. Who is this sexy man? Her brother’s best friend, rocker Vin Clementine. Mr. Rockstar was definitely one of my favorite books to write. It has humor and love and sexy-times as well as some pretty difficult decision making on the part of the heroine.

My latest work-in-progress is Angel’s Power, the second in a book about angel shifters. Angel’s Honor is set to be released in November, so I’d like to get the sequel ready to go so no one has to wait for too long to find out the next part of the story (but don’t worry, I don’t write cliffhangers).

My other work-in-progress is an intense zombie apocalypse story. The three main characters are fighting for their lives right now. I can’t wait to see what happens next!

Fascinating! I love your variety, Erin. This was fun. Thank you for playing along. Okay, I want to hear more about Mr. Rockstar. 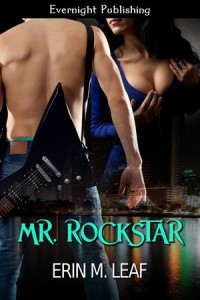 Isabelle’s best friend is getting married and guess who’s the maid-of-honor?

Going to the wedding alone isn’t an option, so when Isabelle’s brother sends his buddy to her rescue, she can hardly believe who it is: rocker Marvin Clementine! He shows up at her door incognito, but nothing can hide the sexy smile that melts her spine.

At the wedding, he is the perfect gentleman right up until Isabelle’s ex-boyfriend attacks him. When Marvin punches him in the nose, taking him down with one swing, what can Isabelle do except take Mr. Rockstar home and kiss his wounds until he’s better?

Of course, one night of bliss isn’t enough for her to overcome her fears. Marvin’s celebrity lifestyle freaks her out, and it would be crazy to move to L.A., right? Especially for someone as shy as Isabelle. Unfortunately, she’s pretty sure Marvin is her one true love…

He shrugged off his jacket and hung it from the hook on the back of her door. “I’m fine.”

“I just want to make sure it won’t get infected,” she said, unnerved by how he seemed to dominate her bathroom. She had flowers on the sink in a vase and fluffy pink towels and Marvin was tall, muscular, and very masculine against all the pastels. He flashed her a smile and sat down, unbuttoning his cuffs. The tattoo on his left arm peeked out as he moved, reminding Isabelle that he wasn’t just Marvin. He was also Vin, famous rocker. Bad boy. Suddenly, she felt like she couldn’t get enough air into her lungs.

He didn’t seem to notice her fascination with his skin as he casually shoved his sleeves up his arms. His tie was already loosened, but he pulled the knot out and undid another button. Isabelle stared for a moment, mesmerized by the soft-looking hair peeking through the open top of his shirt. His arm was exposed enough now that she could see his mourning doves tattoo up close. Their sad eyes stared out at her and she shook herself a little, trying to break the spell his physical presence had cast over her.

Isabelle opened the medicine cabinet. “Yes. Okay.” She pulled out some gauze and disinfectant. “This may sting a little.” She wet the gauze and brought it to his cheek, blotting at the cut. It was mostly clean, thankfully. He didn’t wince when she patted his skin. Instead, his green eyes stared at her, the pupils dark and mysterious. Her hand began to tremble. The heat from his body made the hair on her arms stand up.

“Belle,” he said. “I’m fine.” He cupped a hand around her wrist delicately, the thumb rubbing gently along her pulse point. “It’s okay.”

And just like that, all the feelings she’d been so desperately suppressing for the past day roared up, like someone had just turned up the volume on the radio. His finger on her wrist made her hyper-aware of him: his size, his strength, his virility as he sat in her girly bathroom without complaint. Her face went hot and she dropped the gauze to the floor. Even with the bruise and cut on his face, he was gorgeous.

“This is crazy,” she whispered as he tugged her down. She tumbled onto his lap, wedged between the tub and the sink, legs akimbo.

“I don’t care,” he murmured against her mouth.

She kissed him, unable to stop herself. He smelled like antiseptic and himself, a potent combination that made no sense. He tugged more strongly and she fell against his chest, magenta tulle foaming around them both. He kissed her and she let him, hopeless to resist when his hands slid up her back and splayed across her bare shoulders.

“Belle, you have the most perfect name,” he said, nipping her collarbone.

She pulled back, confused, but then he very deliberately slid his hands around the front of her dress and dipped the tips of his fingers into her bodice, teasing. It wasn’t enough. It wasn’t nearly enough.

“Let me make love to you,” he said, hands moving, but never where she wanted them to go. Her breasts ached.

She bit her lip, breathing faster. The corner of the bathroom vanity was cutting into her arm and her legs were cramped as they tried to fit into the small space. Was she really considering this? You don’t have to marry the guy, a little voice inside her head said. Marvin kissed her shoulder, smiling coaxingly at her.

“Okay,” she finally said, not sure if she was entirely sane anymore. Arousal and need had taken over her body. She realized she’d felt this way since the beginning, when he’d first appeared on her doorstep yesterday afternoon. Was it only yesterday that I met him for the first time? It seemed like much longer than that. She’d denied her feelings, not wanting to admit her attraction to him. Now that she’d gotten to know him a little, it was impossible to ignore.

“Okay,” he said back to her, smiling. To her dismay, he took his hands out of her dress. Just when she was going to protest, he slid them snugly under her ass and stood up, lifting her with no apparent trouble.

“Oh my God, Marvin! You’re going to hurt yourself,” she cried, hands wrapping around his shoulders. The muscles under her palms bulged, his thin shirt no barrier.

He laughed. “You’re not nearly large enough to give me trouble.” He walked out of the bathroom and into her bedroom. “Wrap your legs around me,” he said. She did as he asked, heart pounding when the position pulled her dress up her thighs.

I shouldn’t be doing this, she told herself as he walked, the excess fabric of her dress bunching up between them. He’s going back to L.A. tomorrow. She didn’t let go, however. I want this, she admitted when he kissed her again, somewhat shocked at herself. I want him. The light near the window lit the bedroom with a soft glow, somewhat disguising the clothes strewn all over the place. Marvin pulled back from her mouth and glanced around, quirking an eyebrow at her.

She blushed, squirming against him, then froze when his erection slotted right up against her pussy. “I didn’t have time to clean up,” she muttered, too embarrassed to look him in the eyes. His cock pressed right against her clit. Every time he shifted his weight, it shoved against her deliciously. She tried to keep still, but couldn’t. He felt so freaking good.

He tilted his face toward her, still seemingly unperturbed to be holding her in midair, and kissed under her ear. “I don’t give a shit about your room.”

2 thoughts on “Inside Look with Erin Leaf author of Mr. Rockstar”