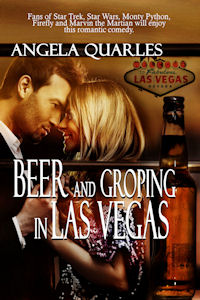 Beer and Groping in Las Vegas

I’m thrilled to have Angela Quarles with me today. I’ve gotten to know Angela’s work though Six Sunday. Her sixes are always witty and fun, she’s a must stop for me each Sunday. I jumped at the chance to have her here today and I gave her ten questions. Her answers are entertaining, you won’t want to miss them, or the blurb for her new release and her bio is down their too, with her social media links. Enjoy. Oh! Be sure to come back up top for the buy links when you’re done. I read “Beer and Groping in Las Vegas” yesterday and loved it, 5-stars all the way. I’m hoping for more Beer and Groping, series please. 🙂 Well done, Angela.

Picture your favorite place in the world. Now, can you tell us a little bit about the place you’ve pictured?

I’m actually living in one of my favorite places! I moved to Mobile, AL in 2009 to live in our old family home and so I’m the fifth generation to live here. It’s a decaying old Southern house that has exercised my imagination and that of my cousins ever since we were little.

Can you tell us about a criticism you’ve received that pushed you into a better writing place?

I think early on, it was hearing that certain things I wrote were examples of telling. Now, I’d already been reading that I should be telling, not showing, and thought I was doing that, but in these particular cases it was a very subtle difference and it drove me to learn more about what they meant. I remember looking at a sentence marked as “telling” and literally scratching my head and wondering how, since I was ‘in the moment’ and ‘showing’ things. This led me to discovering Deep POV and striving to get as much in the heads of my characters as I possibly can through word choices.

How do you come up with your titles?

I wrote a blog post recently on Jillian Chantal’s blog, The Case for an Awesome Title: Why It’s Important and How to Come Up With One,but in short, they come to me now during the brainstorming phase. I say ‘now’ because MUST LOVE BREECHES did not come to me until the third draft. However, after I got my brain tuned to the idea that I needed good titles, they’ve come either before the story idea or during brainstorming (so far!). BEER AND GROPING IN LAS VEGAS, which released less than a month ago, is the only one where the title came first. I work in a bookstore and was trying to think of possible titles for a new project (but one I didn’t have a premise for yet), and was shelving some Hunter S. Thompson, and I was like hmm, what could be a twist off of Fear and Loathing in Las Vegas, and first I was like Beer and Loathing, but I write lighthearted romances, and then ‘groping’ popped into my head. In the next instant I had the hero, as I thought he should be a microbrewer, and that the heroine would be an overworked software programmer. Once I had that, things started falling into place, including the description for him of being a geek trapped in a good ole boy’s body. I had that tagline for him before I even started writing the story. The genesis for MUST LOVE BREECHES, was the same as BEER. I was wandering around the aisles of the bookstore, straightening up and looking at titles for inspiration and saw Must Love Dogs, and “Must Love Breeches” just popped into my head.

What turns you on creatively?

Probably reading, both fiction and non-fiction. Also just observing others around me and letting my mind wander. I love doing What If exercises.

What quality do you most admire in yourself?

Er, man, I’m not sure. I guess actually the aspect I like the most about myself is sometimes the one I hate the most. I have a tendency to get obsessed with things and pore all my energy into it. This can be incredibly beneficial, but sometimes I forget there’s a whole world out there that I should be participating in. I can also lose my focus on that ‘project’ and have a hard time finding that same intense obsession I’d had for it.

What profession other than your own would you like to attempt?

I’ve always wondered if I’d have been a good archaeologist or linguist. I love getting to the origins of things and both of these would have answered that desire.

What is your greatest extravagance?

I probably over indulge in books. Every once in a while, I’ll splurge on a computer game 🙂

Tell us one thing that’s on your bucket list?

Going on an archaeological dig, preferably in Egypt! Also to be photobombed by Nathan Fillion.

What is your favorite music (genre/artist/album/song)?

I love the Cowboy Junkies…

Tell us a bit about the projects you are working on now?

I’m needing to revise two novels, one a steampunk romance called STEAM ME UP, RAWLEY, and the other is a meta fiction romance called NOT ANOTHER DARCY. Right now I’m in the pre-plotting phase for the sequel to MUST LOVE BREECHES, my time travel romance. This is the novel for which I landed an agent back in October.

Can a djinn and a magic slot machine bring two geeks together?

Riley McGregor is a geek trapped in a Good Ole Boy body and as owner of a microbrewery, smart chicks never look at him twice.

Rejected by a geek who wanted to “trade up,” Mirjam Linna would rather immerse herself in work than be the girlfriend-of-the-moment. Stranded in a Vegas hotel, she makes a wish—a night of hot sex with the man of her dreams. It’s granted. She agrees to dinner, but afterward, she’ll say thanks, but no thanks, and see what’s on the SyFy channel. But when they meet, they’re surprised to find they had a shared connection in their past. Sparks fly as these two learn to be in the moment, be themselves and find love.

Angela works at an independent bookstore and lives in an historic house in the beautiful and quirky town of Mobile, AL, with her two matched gray cats, Darcy and Bingley. When she’s not writing, she enjoys the usual stuff like gardening, reading, hanging out, eating, drinking, chasing squirrels out of the walls and creating the occasional knitted scarf. She’s had a varied career, including website programming and directing a small local history museum.
She’s an admitted geek and is proud to be among the few but mighty Browncoats who watched Firefly the first night it aired. She was introduced to the wonderful world of science fiction by her father, by way of watching reruns of the original Star Trek in her tweens and later giving her a copy of Walter M. Miller Jr’s A Canticle for Leibowitz as a teenager. She hasn’t looked back since.
She has a B.A. in Anthropology and International Studies with a minor in German from Emory University, and a Masters in Heritage Preservation from Georgia State University. She was an exchange student to Finland in high school and studied abroad in Vienna one summer in college. She recently found representation with Maura Kye-Casella at Don Congdon, Assoc.